Imperial temple in Shahba .. witness to greatness of civilization in southern Syria

In the city of Shahba to the north of Sweida, the Roman Imperial Temple stands as a model of ancient architecture, as its walls tell a history dating back to thousands of years. 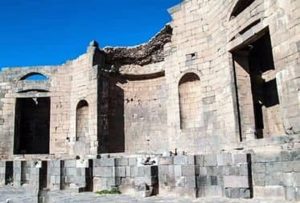 Researcher in the archeology of the region, Hassan Hatoum, told SANA that the Roman Imperial Temple represents a large and organized architectural group around a big and tiled square located to the southwest of the main Roman road, Decumanus.

Shahba ancient city is home to many important archaeological monuments that are still present to this day, including the Roman theater, the great archaeological house baths and the (Filipino) tomb, which was built as a funeral temple for the family of Emperor Arab Philip, in addition to the Shahba Museum, which contains many mosaic paintings and the Roman Imperial Temple.